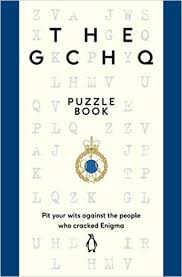 Now here’s a book to boggle the minds of even the most avid puzzlers and quiz-nighters of Pinawa!

GCHQ is the Government Code and Cypher Head Quarters at Bletchley Park, UK.  During World War II, the people there devised codes for sending secret messages for the war effort and also broke the codes of Hitler’s Nazi forces to see what mayhem they were planning.  Nowadays, Bletchley Park houses the National Museum of Computing.

Alan Turing was the mathematical wizard and star code-breaker there.  The movie The Imitation Game is about his code-breaking work and Bletchley Park in general.

A person, S.K., who worked there during the war, was subsequently a near neighbor in 1960 when Helen and I lived in the village of Blewbury.  She invited us to a dinner party using a coded message that we could not fail to solve but was not immediately obvious!  Such skills were used in wartime to feed false information to the enemy by seemingly very hard-to-break codes.  Trickery knows no bounds…

You will find lots of brain teasers in this book!  It starts with easy ones and gets progressively harder.  The solutions are given at the back of the book.  Don’t go there until after you have sampled a few puzzles.

Marg’s note – This book really has something for everyone.  If the word and math-based brain teasers aren’t your thing, page through to the photos of famous people and see how many you can name.