Canada Reads is an annual “battle of the books” competition organized and broadcast by the CBC.  The longlist consists of 15 books which will be pared down to the final 5 on January 22, 2020.  Five chosen personalities will then extol the merits of each of the books. The debate is broadcast over a series of five programs (March 16-19, 2020) and at the end of each episode, the panelists vote one title out of the competition until only one book remains.  (It’s like Survivor but with more books and less torches). This book is then billed as the book that all of Canada should read. The theme for this year is:  One book to bring Canada into focus.

The longlist includes:  NDN Coping Mechanisms by Billy-Ray Belcourt, Small Game Hunting at the Local Coward Gun Club by Megan Gail Coles, Radicalized by Cory Doctorow, Sputnik’s Children by Terry Favro, Amphibian by Carla Gunn, We Have Always Been Here by Samra Babib, Love Lives Here by Amanda Jette Knox, The Dishwasher by Stephane Larue (translated by Pablo Strauss), Son of a Trickster by Eden Robinson, The Youth of God by Hassan Ghendi Santur, From the Ashes by Jessee Thistle, The Lesser Blessed by Richard Van Camp, Worry by Jessica Westhead, The Rage of Dragons by Evan Winter, Dear Scarlet by Teresa Wong. 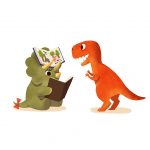 Storytime will start up again this week!  The theme this week is dinosaurs and the Wednesday at 2:15 storytime with a craft will now be held at the F.W. Gilbert school library until the weather warms up.  Thursday morning story times are 9:30 at the daycare and 10:30 with us at the PPL.