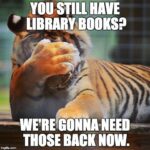 Unfortunately it’s that time again – when we must use our time at the library to seek out and ask for our books back.  We will begin by sending emails then following up with phone calls and letters – this is a time consuming and thankless job that ultimately ends with library privileges being revoked if books aren’t returned.  No one wants this or likes doing it.  Please help us to avoid this – look around your houses and cottages and please return your overdue books. If you are unsure if you have some missing books call or email us and we will check for you.  If you can’t find your books please contact the library to discuss replacing them.

In Five Little Indians, Kenny, Lucy, Clara, Howie and Maisie were taken from their families and sent to a residential school when they were very small. Barely out of childhood, they are released without resources and left to establish adult lives in eastside Vancouver. Haunted by the trauma of their childhood, the five friends cross paths over the decades and struggle with the weight of their shared past.

Michelle Good is a Cree writer and retired lawyer, as well as a member of Red Pheasant Cree Nation in Saskatchewan. Good holds an MFA and a law degree from the University of British Columbia and, as a lawyer, advocated for residential school survivors.  Five Little Indians is her first book. Five Little Indians won the 2020 Governor General’s Literary Award for fiction and the 2021 Amazon Canada First Novel Award. It was also on the 2020 Writers’ Trust Fiction Prize shortlist and the 2020 Scotiabank Giller Prize longlist.

The other 4 books that made the shortlist are:

Scarborough by Catherine Hernandez is the multi-voiced story of a neighbourhood that refuses to fall apart in the face of poverty and crime. The book weaves together the stories of three children growing up in difficult circumstances with the stories of three adults who are doing their best to help them out.

What Strange Paradise by Omar El Akkad is a novel that tells the story of a global refugee crisis through the eyes of a child. Nine-year-old Amir is the only survivor from a ship full of refugees coming to a small island. He ends up with a teenage girl named Vanna, who lives on the island. Even though they don’t share a common language or culture, Vanna becomes determined to keep Amir safe. The book tells both their stories and how they each reached this moment, while asking the questions, “How did we get here?” and “What are we going to do about it?”

Life In the City of Dirty Water is a memoir by Cree activist Clayton Thomas-Müller. It covers his entire life: from playing with toy planes as a way to escape the intergenerational pain of Canada’s residential school system to spending time in juvenile detention and later becoming an activist in the fight against colonial racism, environment degradation and violence. Along this rocky road, Thomas-Müller remains tied to his Cree heritage and spirituality.

Washington Black by Esi Edugyan tells the story of 11-year-old Washington Black, who was born into slavery on a Barbados sugar plantation. His master is Christopher Wilde, a man obsessed with developing a machine that can fly. The two develop a bond, but when a man is killed, Wilde must choose between his family and saving Washington’s life — and the choice results in an unforgettable adventure around the world.